Earlier this year, Seble Teweldbirhan, Media and Communications with Oxfam Ethiopia, was among the winners of the Women's Leadership Award for her exceptional championship of women’s economic empowerment in Ethiopia. In this interview, Seble sheds some light on the Female Food Heroes Award that gathered some 15 million viewers in front of their TV!

How did the concept of Female Food Heroes Award emerge?

Women farmers are the pillars of agriculture in most sub-Saharan countries. They are mostly responsible for growing, selling, buying, preparing and serving food for their families. Yet, regardless of their role as guardians of food security, their participation in business relations is low and they have minimal control on access to resources and inputs including credit and technology. The Female Food Heroes award concept was developed by the Gender Justice team of Oxfam in Tanzania with a notion that the sector is underperforming in part because women, who are often a crucial resource in agriculture and the rural economy, face constraints that reduce their productivity.

In Ethiopia, the Female Food Heroes initiative has been organized around a contest to find the most outstanding women farmers – ones who have overcome challenges and made significant gains in their farming. Their stories will be used to promote the status of Ethiopian women food producers and make their working and living conditions known and visible. The ultimate goal of the Female Food Heroes Award (FFH) Program is to contribute to wider recognition of small-scale women food producers through awarding, acknowledging and celebrating their efforts and contribution to agriculture and food security. Ultimately, it is to build a demand for an enabling environment for women producers - who will be the center of future debates and solutions.

What is the purpose of the Female Food Heroes Award?

The initiative is designed for multiple purposes:

In general, creating opportunities for women food producers to speak for themselves is central to the approach of FFH: the women’s voices and stories inspire and empower other rural women with role models and educate broader publics. The initiative is meant to be entertaining, but also to challenge stereotypes and to present rural women as agents of change. The contest is not simply about who is the most productive farmer, but also rewards success in overcoming challenges and introducing innovative approaches.

Regardless of several challenges, both at systemic level and within their own community (cultural beliefs), [FFH winners] used media exposure and meetings with officials not only to highlight problems but also to advance solutions to move forward.

What impact did this have in Ethiopia?

Ethiopia is a country where NGO led campaigning and advocacy is illegal. However, FFH has created a systematic approach, where women farmers themselves are directly in the driving seat of the advocacy work. The movement is led by the winners, and Oxfam only plays a facilitation role. In fact, this approach by itself has been considered innovative and as one of the many successes of the program. The fact that it’s a community led program opened a space for the issues to be brought in front of policy makers and officials as these individuals are always happy to talk to the community directly. In addition, the dynamic stories of women farmers make a great media content, and their stories have attracted the media. So far, more than 30 documentaries have been produced on the lives of women farmers for broadcast by the national station EBC, with some of them reaching up to 15 million viewers. The annual award ceremony is also broadcasted live. This has created an interest as well as online and offline discussions on the challenges of women farmers, their contribution for food production and the roles of the public as well as the government in seeking solutions.

FFH winners held discussions with some of the top government officials in the country, including the deputy spokesperson of the parliament Shetaye, minister of ministry of agriculture and ministry of women’s affairs. The winners also wrote a letter demanding Policy and practice change for the Prime Ministry of the country. Through their media engagement, the women also repeatedly addressed the public asking for enabling environment and recognition, as well as support in perusing a more scientific and climate smart agriculture. We believe that, this has impacted the public as well as policy makers, who affirm their support for the program and the issues rose on several occasions.

FFH Award Facebook page has now more than 20,000 followers, with people actively discussing and commenting on the way forward to create an enabling environment for women to thrive in the sector.

The women involved in the contests have gone on to become local and district leaders, an outcome that is promoted by the initiative through follow-up organizing strategies. The women contestants are also engaged as communications ambassadors at local, national and international levels. The contest climaxes with a glamorous awards ceremony with celebrities, government officials and media coverage. After the contest, the organizers, along with all the finalists and the celebrities involved, gather to evaluate the experience and debrief on positives, identify areas for improvement, and make new personal commitments for action in their own spheres. 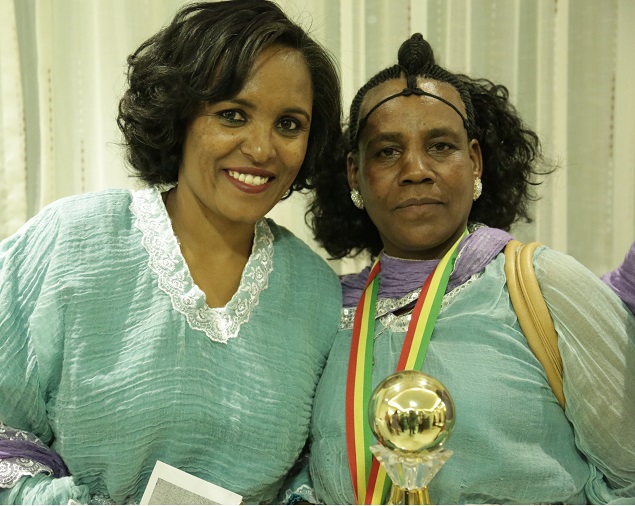 Could you tell us about the recent winners of the award?

We are still waiting to meet and share the stories of the 2016 FFH award winners. The winners are already announced by the regional juries and the national television station EBC is working on documentaries to showcase their successes and challenges. They will be invited to Addis Ababa at the end of December to attend the final award ceremony as well as several meetings with parliamentarians and decision-makers.

Last year, we had ten winners from all regions of Ethiopia. The winners had met women parliamentarians, the minister of women affairs as well as the minister of agriculture. Together with our Good Will Ambassador and two times Olympic Gold Medalist Derartu Tulu, they have had several media engagement, discussing the burning issues of women farmers today including climate change and access to resources. One of our winners from last year, Asgedech Tensay also travelled to the Netherlands and Belgium, to reflect on the issues of small holder farmers to EU parliamentarians and policy-makers. She attended the European Development Days in Brussels and held meetings in Amsterdam and The Hague, discussing the importance of investing on women farmers.

The 2015 winners’ dynamism is illustrated by their initiating of the Female Food Heroes National Platform. The platform was established by the winners with support from Oxfam and from the Ministry of Agriculture. It was officially established on March 8, 2015 as part of the International Women’s Day’s celebrations. The platform plans to meet annually and follow up on main policy asks by facilitating further meetings and discussions with policy makers as well as the media.

So far, the stories of our winners revolve around overcoming the challenges of insufficient land ownership (1.5 hectare by average) and lack of financial and technical support. Society has denied them recognition for their significant role in the agriculture sector, and attitudes towards women have belittled their achievements and successes. However, they fought with the system as well as the community, and registered incredible successes, not only by becoming food secure, but also entrepreneurs and business owners that benefit their community. Some of them are also community leaders, advising other women to promote self-reliance and empowerment.

What does this say about the barriers facing women in Ethiopia?

We have witnessed that women farmers have a commitment to push for better policy and implementation and to get their share from investments in the sector. Regardless of several challenges, both at systemic level and within their own community (cultural beliefs), they have used media exposure and meetings with officials not only to highlight problems but also to advance solutions to move forward. The Female Food Heroes have been clear on the issues that need to be addressed, as well as on their expectations from the government. That is one of the main successes of the programme, which is opening up a space and a communication channel for women small holder farmers, which had been voiceless for so long. Through mainstream and social media, the Female Food Heroes Award gave women farmers a platform to share their concerns with the public and to gather support and ideas.